Seyi Makinde received the draft of the Oyo State Development Plan, 2021-2040, from the Central Working Committee and Technical Group on Tuesday.

A statement by the Chief Press Secretary to the governor, Mr. Taiwo Adisa, indicated that the governor, while receiving the draft of the development plan 2021-2040 at the Executive Chamber, Governor’s Office, Secretariat, Agodi, Ibadan, said that the plan, which would be unveiled through an economic summit, would facilitate economic prosperity for Oyo State and serve as a guide for successive administrations.
He explained that the plan would equally help enforce commitment to promises made to the people, adding that the plan comprises economic development, human capital and social development, infrastructure development and physical planning, among others.

Governor Makinde also stressed that the development plan would keep the people abreast of the government’s visions in ensuring sustainable development in the state as well as promote participatory governance.
He said: “It was just about six months ago that we inaugurated this 27-member Oyo State Economic Steering Committee with a mandate to create the document that will serve as a roadmap for sustainable development for our dear state.

“Well, I am excited that today, we are receiving the document, the Oyo State Development Plan (Agenda 2040) and the medium-term development plan for 2021-2025.

“Well, you know politicians like making promises in every election cycle – in about two weeks’ time in 2022 – that will be the beginning of another election cycle. “What you see is either we make big promises or recycle old promises to the people but what ensures that these promises made become promises kept is having a roadmap with clearly defined milestones and deliverables.

“In fact, I can say that the economic prosperity that we are enjoying currently is because we are working with the roadmap. We already had the plan of what to prioritise, and now, we will prioritise it.

“We have seen what works and so, in keeping with tenets of our engineering a modern Oyo State, and as true pioneers of transformation, our administration embarked on creating this document so that those that are coming after us will not have to go through the same struggles that we went through.
“This development plan will, in the medium and long terms, provide reliable pointers to sustainable development. The document will be presented to the good people of Oyo State in all the geopolitical zones for their buy-in. This is because we do not think we are the most brilliant in the state or we know where the shoe pinches in all the geopolitical zones. So, we will give them the opportunity to see this document and also make their inputs.

“The document will be sent to the Executive Council for approval. We can make plans but when we don’t put timelines, it may just be a mirage. So, I will give a timeline of on/or before the third anniversary of this administration, we would launch the document.”
Governor Makinde, who stated that the development plans contained in the document were based on the four pillars of economic development; human capital and social development; infrastructure development; and physical planning and sustainable development; said it became imperative to plan for the future of the state. 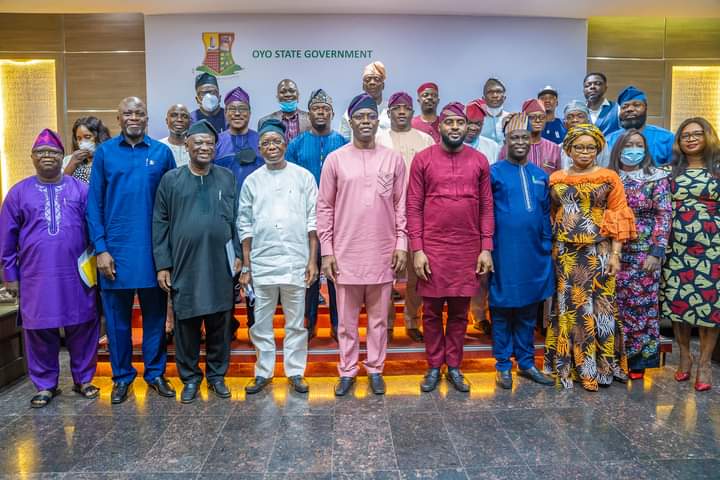 “In putting together this economic plan, a metric that changes the dynamics of the society has to be taken into consideration. But you can be confident that a good job has been done in this document,” the governor added.

He appreciated the effort of the central working committee and technical working group for their immense contributions towards the production of the Oyo State Development Plan (Agenda 2040) and medium-term development plan 2021-2025.

Earlier in his remark, the Commissioner for Budget and Planning, Prof. Babatunde Musibau, noted that the development plan will be the first of its kind in the history of Oyo State.

He hinted that the plan is all about the identification of a more holistic solution to development problems, explaining that the development plan contained four pillars and 25 thematic areas in line with the global development agenda. He also noted that the document has a specific time benchmark with clear vision and smart goals.